By admin
In Social Media

There are a lot of preconceived notions about what matters on Instagram in 2020. For example, people think that most Instagram users are young women. They also think that the more hashtags they use on a post, the better. Is all of this true or is it just urban legend? Keep reading to learn the facts about Instagram in 2020.

Most people think that Instagram is primarily used by American women in their twenties or thirties. If you ask people who is the most followed person on Instagram, a large percentage will tell you Kim Kardashian West. But is any of this true in 2020?

It is only in demographics 35 years and older that women are more active on Instagram than men.

Of the Top 10 most followed Instagram accounts (removing Instagram itself from the list), four of them are men. Clearly, the shifting demographics of Instagram are causing a change in which accounts are the most followed. 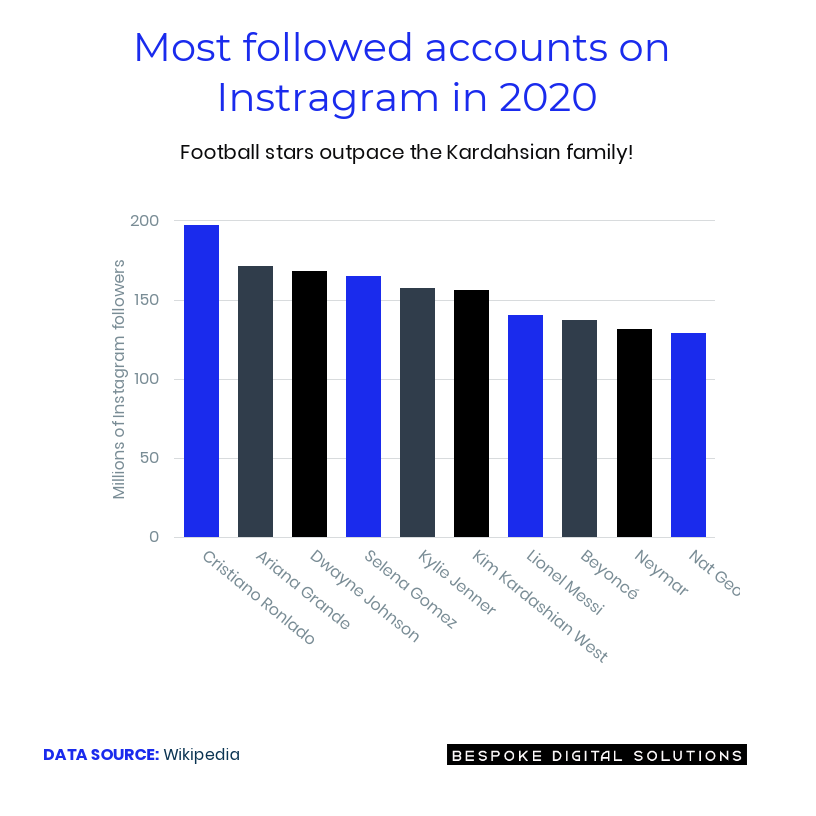 This actually matches expectations. The US has the highest concentration of Instagram users: 116 million, followed by India, which has 73 million users. Brazil comes third with 72 million users. The only European countries to make it into the Top 10 were the UK (22.9 million users) and Germany (19.9 million users).

We had a similar question about LinkedIn engagement. After years of posting on LinkedIn for various clients, we came to the conclusion that it didn’t matter which day of the week we posted. This flies in the face of common wisdom. There are countless blog posts stating that certain days are better than others, but none of them show any real data to back this up. So we decided to test our theory scientifically using multivariate regression analysis. The results backed up our hypothesis: there is no best day to post on LinkedIn in 2020.

Social media sites have evolved considerably since Facebook launched in 2004. They are no longer about facilitating the connection of friends, family and colleagues. Now, they are complex money making machines focused on generating advertising revenue for their shareholders. Facebook (which owns Instagram) generates over $16 billion per quarter in ad revenue. Given the money at stake, social media sites constantly change their algorithms to make sure people spend as much time on the sites as possible so they can serve them ads. In 2020, none of the major sites serve users posts based solely on when they were posted.

Instagram prioritizes content from friends and family. They prioritize posts in a users feed based upon “Interest, Relationship and Timeliness.”

Prioritizing posts based upon interest means if there’s a certain genre of content that you engage with more frequently (e.g. fashion), these types of posts will show towards the top of your feed. Prioritizing on relationship means that, “No matter how many accounts you follow, you should see your best friend’s latest posts.” Prioritizing on timeliness implies that recent posts likely rank higher in your feed and that the timing of your post is still relevant.

Although Instagram does include time in its algorithms, we were not convinced it was a primary driver. What we have observed, in the past year, is that interaction with posts appears to drive not only reach, but also drive profile visits. So we decided to use multivariate regression analysis to test this.

We used a year’s worth of Instagram posts from one of our client’s accounts. They posted regularly for a year, on different days of the week. Their posts were a mix of single photos, videos and photo carousels. Word count and hashtag use varied across posts. We left out all promoted posts, leaving a sample size of 95.

If you want to learn specifics about our regression analysis, don’t hesitate to contact us and we will be happy to share our spreadsheets. For the sake of simplicity and brevity, we are only detailing the results in this post.

The second regression tested whether the above variables affected the number of times the profile was visited.

In both of the regressions, the day of the week was not statistically significant.

Both of the regressions had R squared numbers around .7 and very small (7.53 e-07 and 1.28e-06) significance F levels. This means that they were good fits and we can draw conclusions from them. However, the regression for profile visits had a much smaller standard of error, meaning it is much more accurate. This makes sense, as the first regression tests reach, which is dependent upon Instagram’s algorithm. We believe the large standard of error (115.9) is caused by the unknown factors in Instagram’s algorithm.

The second regression, which tested profile visits, involves a person’s behavior after the Instagram algorithm worked its magic. We believe this  led to its low (8.4) standard of error.

Does it matter how many hashtags you use?

Somewhat surprisingly, hashtag use did not affect either regression. Part of the reason might be that the client used a poor selection of hashtags- we will be running another test in the future to see if the results stand.

However, our instinct is that consumers don’t use hashtags nearly as much as digital marketers think they do. This is backed up by a recent study on Instagram posts from big brands. They use hashtags very differently than smaller businesses. Prada (@prada), for example, uses hashtags sparingly. They tend to use #PradaEditorials, #Prada or #PradaPeople in their posts. The majority of their posts use only one or two hashtags. Interestingly, they are always for branding purposes- not so people can find their posts. Other big fashion houses use hashtags in a similar manner: to build their brands.

Supreme, which was arguably the first big brand to really leverage selling via Instagram, no longer uses any hashtags in its posts.

The following chart backs this up. The results are consistent with our regression results: hashtags don’t drive post reach or profile visits. This is something that marketing teams at big brands have figured out, while smaller businesses are stuck confusing facts with urban legends.

In both regressions, there were three statistically significant factors that drove both reach and profile visits:

Interestingly, the number of comments was significant in both regressions, which we didn’t expect. However, in retrospect it makes sense. We noticed that certain posts from this client generated a large number of profile visits, but we couldn’t explain why as the number of comments wasn’t on our radar screen. Instagram’s algorithm must be giving them a lot of weight, even though it isn’t discussed much in the digital marketing community.

If you want to maximize your reach and profile visits on Instagram, our recommendation is to carefully examine your past posts. Take full advantage of the analytics that come with your Instagram business account. Look at the posts that had a lot of comments, likes and share and identify what they have in common. Use this knowledge to create posts that generate high engagement.

Do you have a business Instagram page and have consistently posted for at least six months? We are looking for more data to run further tests. If you would like to share your data with us, we will provide you with a full analysis of your posting strategy. We will tell you what works and what doesn’t and offer you advice on how you can drive impressions and engagement. Contact us today to learn more!

This site uses Akismet to reduce spam. Learn how your comment data is processed.

We have the same work ethic and communication style of a Wall Street or London City business, so contact us today if you want a no drama digital marketing agency that gets things done in a timely and cost effective manner.

This website uses cookies to improve your experience while you navigate through the website. Out of these, the cookies that are categorized as necessary are stored on your browser as they are essential for the working of basic functionalities of the website. We also use third-party cookies that help us analyze and understand how you use this website. These cookies will be stored in your browser only with your consent. You also have the option to opt-out of these cookies. But opting out of some of these cookies may affect your browsing experience.
Necessary Always Enabled
Necessary cookies are absolutely essential for the website to function properly. This category only includes cookies that ensures basic functionalities and security features of the website. These cookies do not store any personal information.
Non-necessary
Any cookies that may not be particularly necessary for the website to function and is used specifically to collect user personal data via analytics, ads, other embedded contents are termed as non-necessary cookies. It is mandatory to procure user consent prior to running these cookies on your website.
SAVE & ACCEPT