By admin
In Social Media

Social media sites have evolved considerably since Facebook launched in 2004. They are no longer about facilitating the connection of friends, family and colleagues. Now, they are complex money making machines focused on generating advertising revenue for their shareholders. Facebook alone generates over $16 billion per quarter in ad revenue. LinkedIn is now owned by Microsoft and its revenue is rolled into Microsoft’s overall revenue, so it is hard to find exact numbers. But we do know that as of December 2019, LinkedIn revenue was reported to have increased 25%, year on year.

Given the money at stake, social media sites constantly change their algorithms to make sure people spend as much time on the sites as possible so they can serve them ads. In 2020, none of the major sites serve users posts based solely on when they were posted.

Facebook does not serve posts chronologically. They prioritize showing content from a user’s “friends, family and groups.” When this change was rolled out in 2018, Facebook CEO Mark Zuckerberg said “As we roll this out, you’ll see less public content like posts from businesses, brands, and media. And the public content you see more will be held to the same standard—it should encourage meaningful interactions between people.” This sounds quite altruistic, but the changes were made to encourage businesses to buy Facebook ads. In big markets, business posts are not served to users at all unless they purchase ads.

Prioritizing posts based upon interest means that if there’s a certain genre of content that you engage with more frequently (e.g. sports), these types of posts will show towards the top of your feed. Prioritizing on relationship means that, “No matter how many accounts you follow, you should see your best friend’s latest posts.” Prioritizing on timeliness implies that recent posts likely rank higher in your feed and that the timing of your post is still relevant.

Although Instagram does include time in its algorithms, we are not convinced it is a primary driver. More to come on this in our next blog post.

Much like Facebook and Instagram’s algorithm, Twitter’s algorithm works behind the scenes to rank and prioritize posts it thinks people want to see.

When Twitter launched in March 2006, its timeline structure was simple: Tweets were displayed in reverse chronological order. In other words, each user’s feed started with the most recent Tweets and worked their way backwards. A lot has changed since then. Now, Twitter serves you “Top Tweets” first. These are Tweets that its algorithm thinks you will find most interesting and engaging. However, you can also toggle your feed to show Tweets in reverse chronological order, like in the past.

LinkedIn also uses an algorithm to prioritize posts based upon how interesting they think your network will find your post. It is a little different than Instagram, Facebook and Twitter because content stays around longer if it gets a lot of engagement. As long as it keeps getting engagement, your post stays in the mix.

LinkedIn does have a feature (that most users don’t know about, in our experience), that allows users to change their feeds so posts are displayed in reverse chronological order.

After years of working with different clients to optimize their social media posting, we came to the conclusion that there is no best day to post on Facebook or LinkedIn in 2020. So we decided to test our theory scientifically.

We tested to see if the following factors affected a post’s number of impressions: Day of the week it was posted, its number of reactions, number of shares and click through rate.

Our hypothesis was that the day of the week did not matter, but the post’s number of reactions, number of shares and click through rate were significant.

We tested to see if the following factors affected a post’s reach: the day of the week it was posted, its number of engagement and number of clicks.

Our hypothesis was that the day of the week did not matter, but the post’s number of reactions, number of shares and click through rate were significant.

We focused on the following:

Significance F: This tells you how reliable your results are. If Significance F is less than 0.05 (5%), your model is OK. If it is greater than 0.05, you need to choose another independent variable(s).

In a multivariate regression, you get measures for each variable to tell you how significant they might be. We focused on the following:

p value: This is another test of how significant the results are. If it is less than .05, the variable is significant.

The fit of the regression was good, as you can see in the table below. This means that we can draw conclusions from the results.

As we predicted, the day of the week had no significant effect on the number of impressions- this was true for every day.

Interesting, the number of times a post was shared was significant but the negative coefficient is counter intuitive. We thought the relationship would be positive. Either LinkedIn’s “ad machine” is limiting the impressions on unpaid, organic posts, or our sample size for this variable was too small and skewed the results. We will research this in the future and report back. 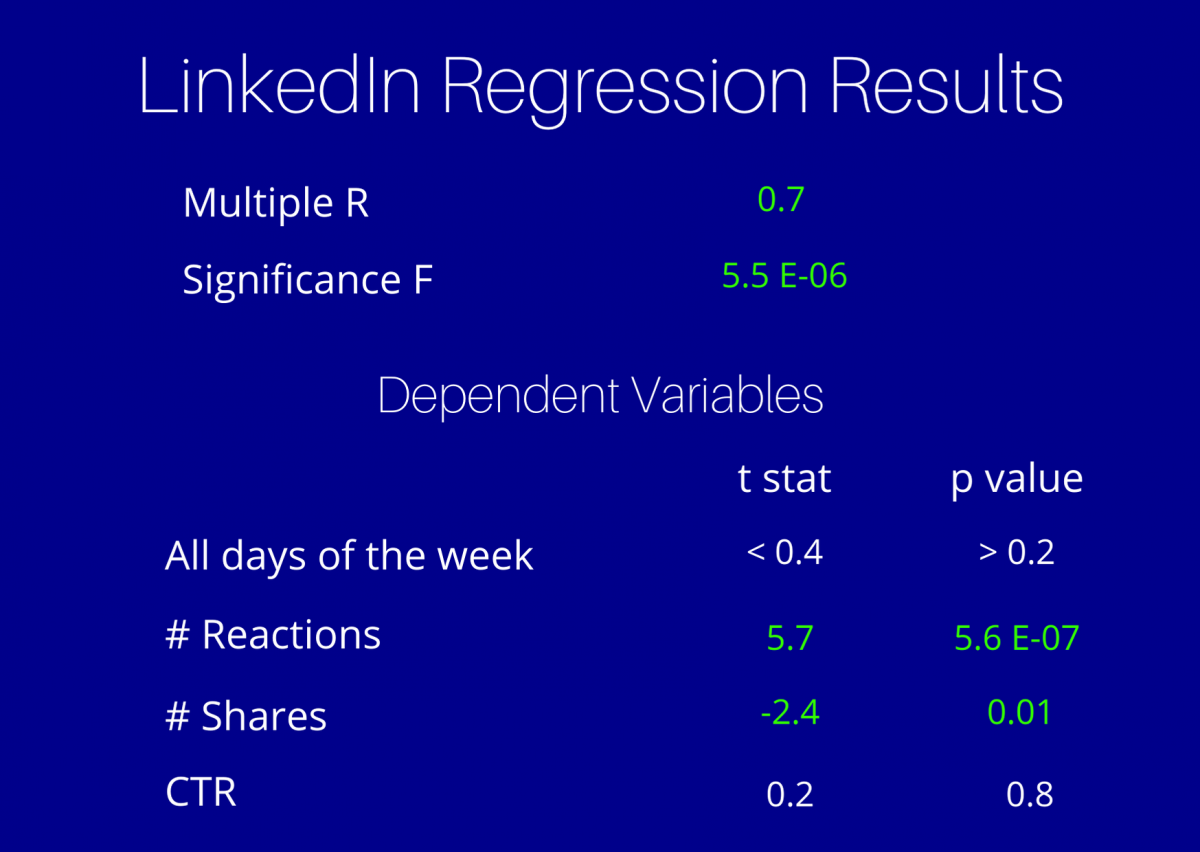 This regression was not a good fit. This means that we cannot draw any firm conclusions from its results. 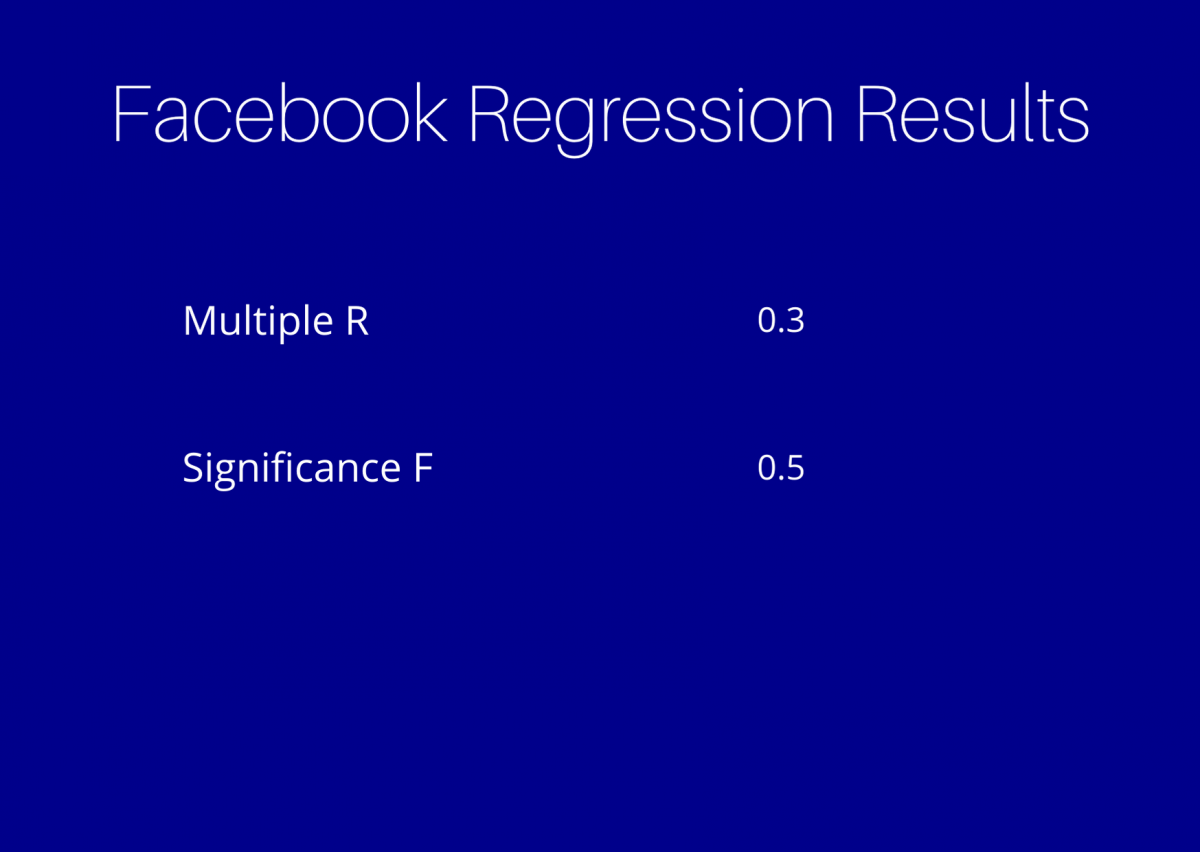 Do you want more details about how we conducted our regression analysis or the results? If so, book a FREE CONSULTATION and we will be happy to share our methodology with you and discuss.

As we suspected, there is no best day to post on LinkedIn 2020. LinkedIn’s algorithm clearly does not factor in post timing in any significant manner. Yes, users have the option of seeing posts in reverse chronological order (most recent to least recent), but not enough of them are doing this to make it correlated to the number of impressions a post makes.

Content is clearly the most important factor in making LinkedIn posts. You want to tailor your posts so your network finds them interesting enough to like. People interacting with your posts is the main thing that causes them to be shown to more people.

The Facebook regression was not a good fit, even though the posts were very similar to the LinkedIn posts and the data set was larger. We believe this is because Facebook is not showing business posts unless they are paid for, so their algorithm is over riding all of our independent variables.

Our advice is to either make a Facebook group for your business (if you can make it interesting enough to drive interaction), or pay to promote your posts.

Do you have a corporate LinkedIn or Facebook page in which you have been consistently posting for at least six months? We are looking for more data to run further tests. If you would like to share your data with us, we will provide you with a full analysis of your posting strategy. We will tell you what works and what doesn’t and offer you advice on how you can drive impressions and engagement. Contact us today to learn more!

This site uses Akismet to reduce spam. Learn how your comment data is processed.

We have the same work ethic and communication style of a Wall Street or London City business, so contact us today if you want a no drama digital marketing agency that gets things done in a timely and cost effective manner.

This website uses cookies to improve your experience while you navigate through the website. Out of these, the cookies that are categorized as necessary are stored on your browser as they are essential for the working of basic functionalities of the website. We also use third-party cookies that help us analyze and understand how you use this website. These cookies will be stored in your browser only with your consent. You also have the option to opt-out of these cookies. But opting out of some of these cookies may affect your browsing experience.
Necessary Always Enabled
Necessary cookies are absolutely essential for the website to function properly. This category only includes cookies that ensures basic functionalities and security features of the website. These cookies do not store any personal information.
Non-necessary
Any cookies that may not be particularly necessary for the website to function and is used specifically to collect user personal data via analytics, ads, other embedded contents are termed as non-necessary cookies. It is mandatory to procure user consent prior to running these cookies on your website.
SAVE & ACCEPT